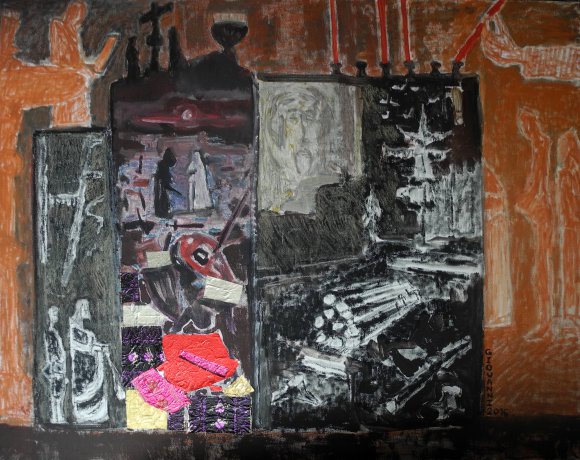 Conception of the picture was influenced by the Black Square by Kazimir Malevich. The artist asked himself, what image is contained in this “icon”,what can be inserted in thisfigure, so that it does not loseits own content? Thus, he imagined a memorial table — a piece of church furniture, where people place candles in memory of the deceased. The memorial table is a solid base that has a deeply symbolic meaning. The memorial table is an embodiment of memory of the deceased andfaith in their living presence with us during the memorial service. Probably, the acutest feeling now issorrow for the deceased fighters. The well-known “Requiem” painting by Vasily Vereshchaginreproduces the depth of this sorrow. “Victory Day” picture represents two characters of the “Requiem” – the priest with a censer and the officer with a peaked cap andthe Gospel behind his back